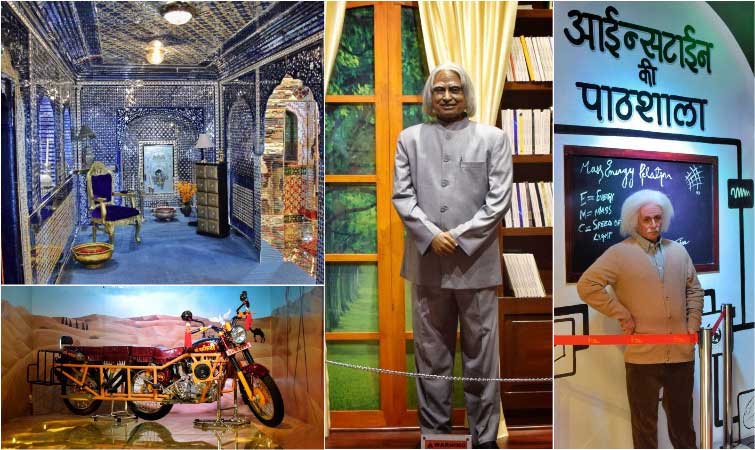 Among the many beautiful architectural marvels, Nahargarh, translated as ‘the abode of the tigers’, is an 18th-century Indian-European architectural marvel that still stands strong and gives scenic views of the city of Jaipur. Jaipur wax museum added more points to its attractiveness.

‘Jaipur Wax Museum’  is a unique tourist destination in Jaipur. It has been crafted with an idea of giving people of the Jaipur pink city and the Indian and International travelers a new place that holds the history, cinema, and sports celebrities, literature, art & culture, and royal grandeur under one roof.

The museum is the brainchild of Mr. Anoop Srivastava of Entertainment 7 Ventures Pvt. Ltd. who laid the intellectual foundation for this project with the Pink City Film Festival in 2006. A skilled team of technicians, designers etc. restored the fort and the interiors were adapted to create an attraction that would add yet another crown jewel to Rajasthan Tourism. The Jaipur Wax Museum has wax sculptures of around 25 personalities.

The museum has separated its attractions based on different themes and displayed it in the Shastraagaar and Vishraamghar sections of the Nahargarh Fort. The museum tour begins at the ‘Hall of Icons’ where visitors can marvel at lifelike exhibits of iconic personalities like national heroes, celebrities, sports stars, and cinema stars. It also contains a special section for kids where they can meet their favorite characters like Spiderman, Ironman, Doraemon, and Nobita. The ground floor of the Vishraamghar displays wax and silicon statues of Rajasthan’s royal lineage of Maharajas and Maharanis in traditional costumes.

A unique area which was the Warriors’ Rest House (Vishramghar) has been uniquely crafted into a Sheesh Mahal. The Sheesh Mahal has thikri mirror work, a craft that dates back many centuries. Jaipur Wax Museum open its doors to people on the 17th of December 2016.

You can’t deny amazing places to visit in jaipur.